The author reflecting on life

I was born in Skala in 1931 when times were already hard, then was eight years old in 1939, when the USSR occupied Polish eastern Galicia and began snuffing out religious life. I was ten when the Nazis invaded with a diabolical plan to obliterate Jewish life altogether. So why should I have fond memories?

By the time the Red Army drove out the Germans, two years and 10 months after the Nazi takeover, I was 13 years old and one of about 80 Jewish survivors from Skala—80 of about 1600 of our landsmen who lived there before the Shoah. I managed to survive the mass murder of our community by some blessed combination of determination and blind luck.

Later, I was able to emigrate together with my father, living for years in Displaced Persons (DP) camps in Poland and Germany before arriving penniless in New York at the age of 20. In America, I succeeded in creating a new and much better life for myself, in which I was able to build a wonderful new family and succeed in business beyond my wildest dreams.

That tale of personal devastation in Ukraine and reclamation in America is both the story of my life and the subject of this book. 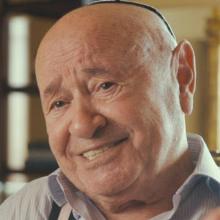