Munye's bunker buddy who was held by Ukrainian nationalists

That week something wonderful happened when my old bunker buddy, Sroel the tailor, turned up on my doorstep. What a miracle! He had left our old bunker camp days before it was discovered, but later captured and held by a group of Banderovtsy. They had kept him with them in the forest, sewing clothes for the rebel fighters, but now he had escaped.

I told him that Tateh and Lonye were both away with the army, and that I was living here with the Peckers. Since Sroel had no place else to go, I invited him to join our living arrangement.

So now I had become the big landlord, even though I wasn’t getting paid for it. Besides the Peckers, we had also taken in another single man who had lost his whole family. And now Sroel, too. 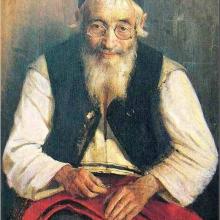