Skala survivor and community leader who passed away in 2018

I checked out the action at the registration office on the first day. I noticed that there was a young Jewish man working there whom I had seen around town since the time of the liberation. He was hard to miss since he was tall and walked with a limp.

I knew he was related to the Weidenfelds, one of the merchant families in Skala, and had been educated at the free high school. Having survived with several family members in bunkers, he was now living in town and working for the government. He could not be drafted because of his infirmity.

This was Max Mermelstein, the man who would later become my dear friend in the United States. 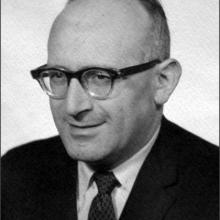