Town with a similar name to which Jewish survivors were evacuated

We rolled down the main street of the regional city Chortkov, where I had never been before, but heard much about. I saw that it was more densely built up than our small town but all the stores had boards on their windows. On the road to Tarnopol, we turned to the northwest at a crossroads and continued onward for another hour.

Eventually we ended up in a town with a name very much like our own town, Skalat with a ’t’ at the end. It was one in a line of positions northwest of Tarnopol to which Russians forces had regrouped.

Skalat was familiar in another way. The Jewish community here, as at home, had been decimated. The few survivors were coping as best as they could to pick up the pieces. We were invited to move into vacant Jewish houses in Skalat and scrape by with the locals until the military situation was resolved. 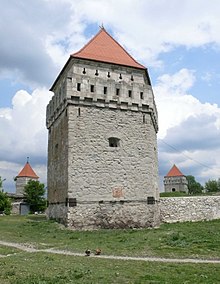