Brichah operated several smuggling networks. The main route went south into Czechoslovakia and then across the German border directly into the American zone. When our opportunity came in the Spring of 1946, it was by a new northern route from the Polish city of Szczecin into the Soviet zone of occupation and then to Berlin, which was by then a divided city with separate U.S., British, Soviet and French sectors of control.

In Szczecin, formerly the German city Stettin, we were placed with rough-mannered but kindly Brichah guides aboard Russian trucks and driven to the border, which was nominally controlled by Polish guards. The cover story was that we passengers were a load of expelled Germans returning to the Fatherland. We were told to keep quiet in our covered truck bed.

The truck rumbled to a stop and we guessed we were at the frontier. The Brichah guides jumped out to transact business with the guards. Very likely money changed hands. A minute later we were through on our way to the German capital. 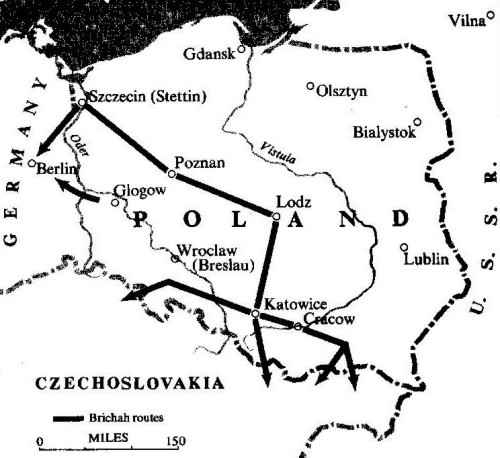