My father, whose subsequent survival was as miraculous as my own, served as my pillar of strength throughout the period of our ordeal, except for the several times when we were separated by circumstances and I had to carry on without him. I was able to survive at key moments only because of his actions, strategic thinking and constant encouragement.

My father’s ability to secure labor assignments from the Germans saved us from prompt liquidation on several occasions, as did his wisdom at just the right time to leave the seeming security of the Wehrmacht's workshop for the feared unknowns of life in the forest. There, in a series of God-forsaken, cramped and filthy bunkers, he nursed me through a near-fatal typhus contagion.

Tateh was a simple man without pretensions. He didn’t talk much, but had an uncanny ability to size people up and to see past their words to their inner thoughts. That talent was an asset to him in selling his tin wares before the war, and it was instrumental in getting the two of us through those terrible years. 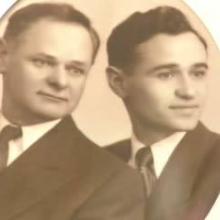