The author's grandfather was a prominent figure in Skala

My grandfather, Schloma Peretz Engelbach, was a famous figure in Skala, since he was the shammes of the Chortkover house of prayer. A shammes is a non-ordained clerical administrator, something like an English sexton. Actually each of the various smaller prayer houses in town had its own shammes, but Schloyme Perets, as he was called, was preeminent among them.

Among his many duties, my grandfather witnessed weddings, births and circumcisions, and managed the Jewish cemetery. He was the one guy in town who really knew where the bodies were buried. 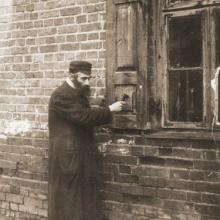