One of many Israeli prime ministers with whom Michael met

Later on, since I have had money and became a big giver, I have had the honor to meet every Prime Minister of Israel, starting with Yitzhak Rabin during his first term in office in the mid 1970s.

I have pictures in my office of myself and Florence with many of the prime ministers, including Begin, Shamir and Sharon, each of them a great leader in his own way. I feel deeply honored to have received that access, and more importantly, to have had the opportunity to make a positive difference for Am Yisrael, the people of Israel. 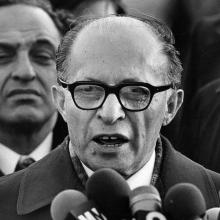