Sheltered in Place During the Forest Aktion

Close call as Ukrainian police and militia sweep the forest

One night Sroel came back early from a food run with alarming information. He had been told by a peasant that German troops and Ukrainian police were preparing for a massive sweep of the forest on the following day.

Panic spread through our camp. Did they have specific information about our location? If we sheltered in our bunker during the raid, would we risk being smoked out and shot? It didn’t matter since it was too late to go anywhere else; we would have to take our chances. We disassembled our lean-tos and restored the camp to natural condition.

As daylight broke the next morning, our group lay side by side in the bunker not making a sound. Then in the distance, there was muffled gunfire. A half hour later, we heard a squad of soldiers marching on the logging road in our direction, the crunch of their boots on the ground and a sergeant barking orders.

We all gave a silent sigh as they kept marching past our position. But then, suddenly, right above us, there was the click of a cigarette lighter. My God, I thought, there’s a soldier there. Is he setting a fire? 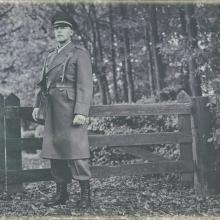 Life and Death in the Forest