Miriam Hoffman reflects on her life in YIddish

After the first meeting I saw Florence several more times at the clubs. She was usually with her two girlfriends, Miriam and Betsy, who lived in her neighborhood in the Bronx. They also studied together at the Workmen’s Circle school, where they went to study Yiddish in the afternoons after their regular high school let out.

Later, I would get to know Miriam very well as a lifelong friend. She became a Yiddish scholar and playwright. She taught Yiddish studies at Columbia University, and was a regular columnist in the Yiddish Daily Forward. Her son Avi Hoffman is an actor and comedian who made a career of reviving Yiddish theater in New York.

At the time, I knew Miriam slightly from our days at the same camp in Ulm, where she had spent her time collecting Yiddish folk songs that she later published in an illustrated songbook. 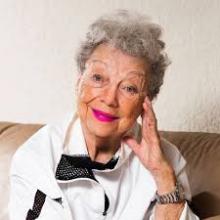