My success with milk pails in the market did not go unnoticed by the authorities. One day a Red Army sergeant showed up at my door and introduced himself as Mikhail, a former tinsmith by trade. He was not a Jew, but he proposed that we should work together to supply tin wares for the barracks mess.

At first I declined, explaining that I was just a one-man shop without any ambition to become a supplier for the Soviet Army. But Mikhail replied that in the great Soviet Union all businesses must serve the people.

From now on, this would be a “people’s tin shop,” he declared. Then he posted a sign outside the door that said “Prom Kombinat,” which translates as something like “union shop.”

What was I going to say? The Soviet Army had been our liberators. 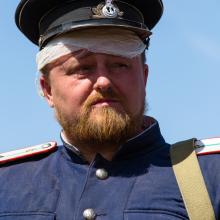