A visionary who was tough to the core

Around the time of our first Israel Bond purchase, in 1958 or ‘59, we went to hear David Ben-Gurion, then Israel’s prime minister and considered the father of his country, when he came to speak at a synagogue in Brooklyn. I couldn’t afford a chair for the prestigious event so I sat on the stairs. It was very moving to hear him speak, even though he was the leader of the Labor Party and I was a Beitari.

Ben Gurion was a visionary, but he was also a practical man who made things happen. He was tough to his core, and to me he was the incarnation of Israel. Later on, since I have had money and became a big giver, I have had the honor to meet every Prime Minister of Israel, starting with Yitzhak Rabin during his first term in office in the mid 1970s. 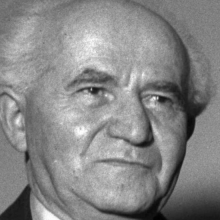 Ben Gurion in the Camps