While eating, we were joined by the men’s ranking officer, a handsome man in an officer’s uniform. He sent two of his men with me to get Tateh, who was so weak that the two beefy soldiers carried more than he walked down to the square to meet the captain. “My congratulations on your survival. I’m sure it took great courage and resourcefulness,” Kaminin said.

He said that unfortunately there was not a medic available to look at Tateh’s injuries. “To me, you look obviously malnourished and I think your leg muscles are atrophied. With food, rest and exercise, you should recover in a few weeks.”

Then as an aside he added, “I would advise you not to get well too quickly, because than you’ll become eligible for the draft.” 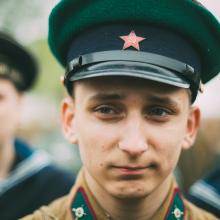