We played against teams from other camps and also with German clubs from the nearby towns. They had good athletes who were generally healthier than we were, but we played hard and smart and most of the matches were competitive.

Since their side had lost the war, the German athletes did not act superior to us. When I trained with Germans in boxing or playing soccer, they kept their mouths shut and it was strictly about sports. I never heard a nasty word.

My boxing trainer was a German named Hans, who was a very skilled pugilist. He had a son, younger than me, with whom I sparred. That kid had some fast footwork and I worked hard to keep up with him. 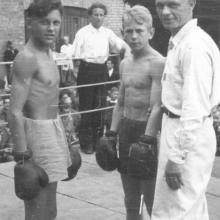