It was on one of these days [when we were reassigned to the border guards] that Tateh had a run-in with the infamous Artur Engel, the corrupt Zollgrenzschutz officer who was well known in Skala for extorting valuables from Jewish families, frequently in the company of a snarling German shepherd.

If there was anyone who was the personification of evil in Skala, even more than Hitler himself, it was Artur Engel.

I don’t know what Tateh did to draw Engel’s menacing attention, but I saw the fearsome tyrant stride up to my father, demanding to see his work papers. Tateh drew out his pouch to get the requested document, but Engel snatched it from him and ripped it open.

The first thing he pulled out was a photo that Tateh always carried, a picture of himself in his Austrian Army uniform, which only enraged Engel further. He ripped the photo into pieces and ground them with his boot heel into the dirt.

“You were no soldier,” he spat at Tateh. “You were swine. Jewish swine”

Then he reviewed the work papers and, finding them in order, dismissed my father. I breathed a sigh of relief, glad that the ugly moment had not escalated into something worse. 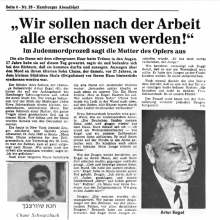 More information
Skala Yizkor Book: At the Trials of the Nazi Murderers in Germany, by Chaim Bre…