Red Army base in Czortkov

Shulem Epstein was held there for military desertion

The Army base where my father had been taken was on the edge of the town. Outside the security gate was a public area where Jews were gathered seeking information about family members. I asked around and was told I might be able to get a message through to someone in detention by passing a note to a guard through the perimeter fence, especially if there was something in it for the guard.

Later I came back to the base with a note addressed to Schulim Epstein. I found the military police detention area bordering the outer fence. There I encountered a guard patrolling the other side of the fence. I signaled him over and asked if it was possible to pass a note to a prisoner, and he gruffly said “nyet.”

Then I produced a packet of papieros [cigarettes] that I had brought along with me for moments like this. The guard’s eyes lit up. Well, yes, sometimes exceptions could be made, he allowed, as he pocketed my gift.

He said he would find my father and bring him out to talk to me. 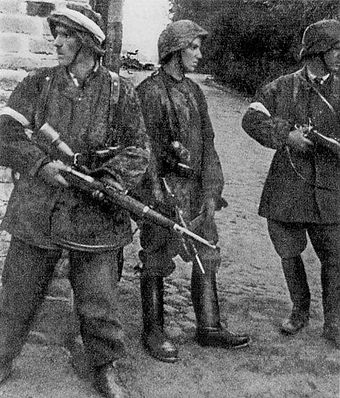 Boy Against the Army