The authorities tried to isolate the contagion within the Jewish ghetto

A typhus epidemic was already rampant by the time we arrived. The disease was spread by lice that flourished in the mattresses and bedding in apartments throughout the ghetto. Then the lice would move to the hair and scalps of the ghetto residents. The common name for the disease was spotted fever, because it produced a characteristic skin rash on the trunk of the body which spread to the arms and legs, then finally to the face. Sufferers became increasingly disoriented and eventually demented. In the end stages, they would fall into a coma and die.

The Germans were especially vigilant to prevent the spread of the disease beyond the ghetto, since they were keenly aware that the virus didn’t discriminate. But they reserved all public health measures—both prevention and treatment—to their own population. Their strategy was to let the virus infect the ghettos but quarantine the Jews from any contact with the outside world.

No delousing baths or chemical sprays were made available to Jews in the ghetto. Neither were the experimental vaccines developed by German doctors. Indeed, sick people hid their condition from the authorities to save themselves, because the Germans routinely killed known sick cases. Jews seen escaping the ghetto were targeted for killing because they might be carriers.

The result is that hundreds of people lived in the Borshchov ghetto as their spotted fever grew worse and their time to die drew near. The rest of us picked lice from each other’s heads every morning and night. 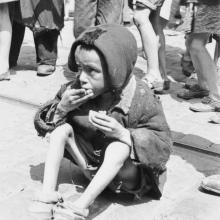