The solemn music playing from the loudspeaker on a pole in the town square died down and a voice crackled through the radio static. “Attention. Moscow is speaking.”

The hour was noon on June 22, 1941. All morning long, townspeople had been milling around, sharing rumors about the outbreak of war between Germany and the USSR. A few families had radios in their homes, but just about everybody else—Jews and gentiles alike—was in the square waiting for some official news.

I was aged 10 at the time. I jostled in the crowd to find a listening spot.

The announcer from Moscow read a short statement saying that German forces had invaded the country without provocation at four o’clock that morning. After nearly two years of Soviet occupation, my Russian was good enough that I could understand most of the words. German aircraft had dropped bombs on interior cities including Kiev, he said.

Citizens were asked to be vigilant and to await further information. And then the dirge-like music resumed. 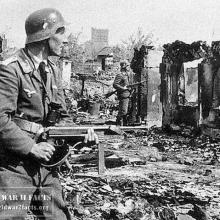