First Dance at a Yiddish Social

When Michael Met Florence at the David Marcus Club

The David Marcus Club hosted social mixers on Sunday afternoons. It was on one of these occasions that I first noticed a young girl who was pretty and smart and confident. She was a few years younger than me, not yet 18 and still going to high school. She was there with some of her friends and I was with Herbie. We began talking and I learned her name was Florence, or Feige in the old country.

When they started spinning records, I asked her to dance, and we followed the first foxtrot with an up-tempo waltz. She was a better dancer than I was, especially since I was too occupied gazing into her eyes to pay attention to my feet. But she was more than just a pretty girl and good dancer. She was clever, too. And even though she was more educated than I was, she didn't make me feel any less for it. The more we talked, the more I liked her. 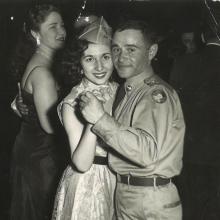 This is a PPE image caption
Edelstein Family