Ben Gurion in the Camps

Michael was stirred to hear Ben-Gurion speak at Eschwege

Zionist activities at Eschwege were intense. Each of the numerous Zionist parties fielded candidate slates in elections for our camp self-government. We also elected a representative to a district council and sent a delegate to a body in Palestine. My father voted mainly for the Revisionists. I supported them as well, although I was too young to vote.

Several of the major Zionist figures came to camp for speeches. I remember seeing Ben-Gurion in 1948, a few months after he had declared the establishment of the State of Israel and become its first prime minister. [This details of this memory may be faulty, since Ben-Gurion actually visited Eschwege in 1946, during Michael's first year at the camp.—Editor]

His speech in Yiddish was meant to inspire us all to come to Eretz Yisrael and help to build the Jewish homeland. He spoke about the kibbutzim and the collective enterprise of Jews from around the world coming together to build a new country from scratch. 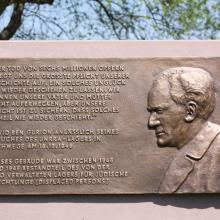