Antisemitic actions in postwar Poland reached their climax at Kielce

One day I was standing in the rynek when a Polish woman went running past screaming something about Jews and the blood of children. She was chased and soon apprehended by two policemen, and it turned out she had stolen merchandise from a Jewish shop. Her preposterous “blood libel” accusation was shown to be just that.

That was not so in other cases, however. Mob violence against Jews, often inflamed by false “blood libel” charges of child-killing, had erupted throughout Poland since our arrival. In the second half of 1945, there were outbreaks in Rzeszow, Krakow, Sosnowiec and Lublin.

The worst was yet to come. In July 1946, scores of survivor returnees to the city of Kielce were massacred to avenge reports of a missing Christian child. The child later turned up perfectly safe, but by then 42 Jews lay dead. 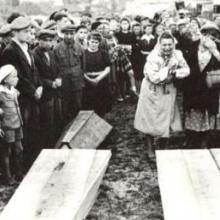