We were entering into a displaced persons (DP) camp system that had been established by the Allied forces in late 1944 to house and feed the millions of foreign nationals in Germany and Austria who had been displaced by the war. The camps were administered by the United National relief agency working with occupation authorities.

Conditions in the camps were extremely bad in the early months after Germany’s surrender, with desperate food shortages and a lack of basic supplies. By the time we arrived in Germany, hardships had eased to a degree, and two important administrative changes had occurred [as a result of the Truman Directive of December 22, 1945].

Now most of the camps were organized by religious identification, not national origin. Previously, Jews had been housed among gentiles from their home countries, including those who might have been their wartime tormenters. Now, camps for Jewish DPs were to become exclusively Jewish.

The second change was that the U.S. made Polish nationals who arrived as refugees in the U.S. zone eligible for DP status, which had previously been available only for refugees who had been in Germany and Austria at the time of the liberation. So Tateh and I and our truckload of Polish Jews would be eligible to become DPs—if we could get to the American camps. 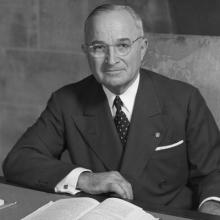 More information
Wikipedia: Truman Directive of 1945
USHMM: New Directive on Immigrant Visas to the US