Surviving Jews from annexed Ukraine were resettled in western Poland

Repatriation, they called it. Yet in truth we were not really going home to Poland, the country in which we had lived before 1939. Quite the contrary, we were leaving the only home we had ever known and heading west into the unknown.

Citizens of the annexed Polish provinces had the option to be repatriated within the new borders of Poland, specifically to the areas in the west from which millions of Germans had recently fled or were soon to be expelled.

We didn’t have to think very long about it—neither us nor 90 percent of the tens of thousands of surviving Jews from Ukraine, as well as most ethnic Poles from newly Soviet western Ukraine who decided to take advantage of the offer of repatriation. Yes, we were leaving our ancestral homeland, but there was nothing there for us anymore.

Our families were gone, our communities destroyed. And with the strict atheist ideology of the new Soviet order, there was no possibility of a Jewish life being reborn. 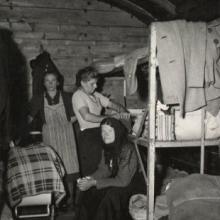